Extensive renovation has begun at a 16th Century property known as Plas Uchaf, or “the Place Above”, as part of the company’s duties as steward of the Mostyn Estate.

Plas Uchaf was built as a residence for the Mostyns and is intricately tied to the history of the family.

Beautifully constructed of local sandstone under a slated roof, the Grade II Listed property has retained many of its original structural features. 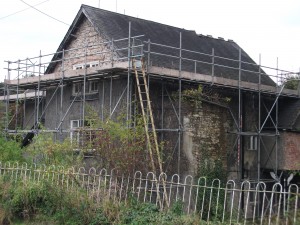 Preparing for works at Plas Uchaf

Works include the re-roofing of the property in Welsh Slate, sourced locally from Penrhyn Slate Quarries. We removed the roof to expose original structural roof timbers, found to be in good condition, bearing in mind their age. It is likely that the oak timbers which make up the purlins and bracing in the roof originated from Whitford Wood, as was the case when Mostyn Hall was re-modelled.

As we work down the building, fascia timbers will be replaced, employing local stonemasons to remove the dark render from external elevations to expose the sandstone below. This will then be treated to prevent water ingress and will be re-pointed in lime, which is a natural based product, sourced from Ty Mawr Lime.

We are fully committed to what we expect will be a lengthy project to rejuvenate this historic property. Stephen Gladwin, our surveyor supervising the project, said,

“I am extremely pleased that our Directors have authorised remedial works on this grand property, and I look forward to delving into the property’s past and seeing what other features it holds as work progresses.”

The likely end use is not known at this stage, but Plas Uchaf could lend itself to being a very spacious family home. 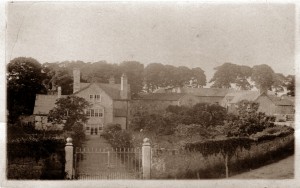 Plas Uchaf is part of the Mostyn family’s long history. The building was mentioned as ‘the hyer place’ in family marriage settlements of 1541 and 1563 and was undoubtedly intended as a dower house.

Before inheriting the estate in 1618, Sir Roger Mostyn utilised Plas Uchaf as one of his residences, probably rebuilding part of the structure.  Above one of the fireplaces is a heraldic shield dated 1603, which features his lion rampant heraldic badge, quartered with the eagles of the Wynns of Gwydir, celebrating his grand marriage alliance to Mary, the daughter of Sir John Wynn, in 1596.  Once the couple inherited Mostyn Hall, they proceeded to plaster this iconography throughout the building. It is known that Sir Roger Mostyn’s children were schooled at Plas Uchaf.

Following the Royalist defeat during the Civil Wars, Colonel Roger Mostyn is said to have been forced to reside at Plas Uchaf because he could no longer afford to run Mostyn Hall.  Pennant says, ‘This gentleman’s loyalty cost him and the family dear.  He spent about sixty thousand pounds in the service of His Majesty.  His house of Mostyn was plundered and stripped so that he was obliged to retire to a small house called Plas-Ycha, about a mile distant from Mostyn‘. There is little real evidence to support this claim, but the family Bible does confirm several of his children were born at Plas Uchaf.

Our thanks go to local historian, Shaun Evans, for his help in bringing together the property’s past for this article.