Members of the Flintshire Urdd Committee and their families took part in a sponsored walk over the Flintshire Estate on the morning of Saturday 20th June to raise funds for the Flintshire National Urdd Eisteddfod, which will be held in Holywell in 2016.

The group started out from Whitford Primary School and took the picturesque route over the parkland at Whitford, taking in the flora and fauna of the Parkland and Whitford Wood, before crossing over Drybridge Lodge, into the Mostyn Park, before having a well earned refreshment break at Mostyn Hall.

The group were then able to have a tour of Mostyn Hall and the gardens, before walking back to Whitford. 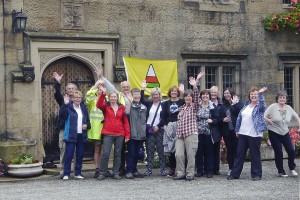