Lancaster out of Air Show due to engine fire

The UK’s only flying Lancaster bomber, due to be part of the Llandudno Air Show in a few weeks, may not now be with us, due to a mid-air engine fire during a practice flight.

It will be a great shame if the Lancaster cannot join us, but the other two Battle of Britain Memorial Flight aircraft, a Spitfire and a Hurricane, will still be displaying in Llandudno on 23rd May. 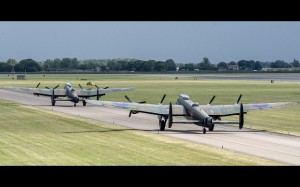