Mostyn Estates owns the land in which the ruined remains of the Deganwy castles lay embedded.  Often situated in a frontier zone between the native Princes of Gwynedd and invading English armies, the site was a focus of settlement and conflict for centuries, repeatedly being recaptured, demolished and rebuilt by the two rival powers.  In the 6th century the site became a place of major political importance as the court of Maelgwn Gwynedd, King of Gwynedd until his death in c.547.  Legend states that he died in the church of Llanrhos where he had shut himself to escape the yellow pestilence.  The Norman Robert of Rhuddlan built a castle at Deganwy in 1080 which was later captured and destroyed by the Welsh.  Llywelyn ab Iorwerth (c.1173-1240) again recaptured and rebuilt the castle in 1213; a stone carving found at the site bearing a crowned head (now displayed in the National Museum of Wales) is said to be a representation of him.  Henry III of England also started construction work at the site between 1245-54 only for this fortification to be captured and demolished by Llywelyn ap Gruffydd (c.1246-82) in 1263.  Following the conquest of Gwynedd by Edward I the site of Deganwy was abandoned with nearby Conwy being preferred as location of the new castle.  See: www.castlewales.com/deganwy.html 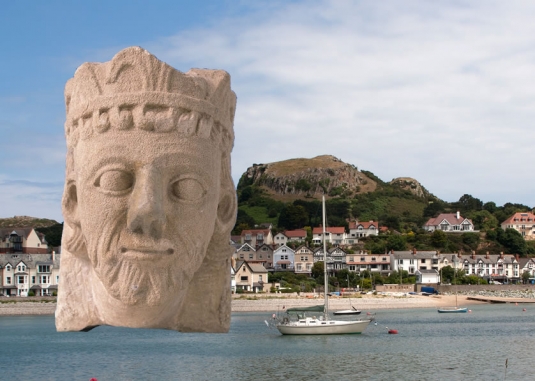