Mr. William Coyne of Holywell and the Mostyn family servants

William Coyne was an 18th century medical practitioner based in Holywell. The three volumes of ledgers outlining his day-to-day responsibilities between 1746 and 1773 indicate that he regularly supplied drugs and prescribed remedies to the populace of the locality. Sir Thomas Mostyn the 4th Baronet (1704-58) and later his heir Sir Roger Mostyn the 5th Baronet (1734-96) provided his biggest source of income with scarcely a week going by without several items being charged to the Mostyn household account. Numerous members of the Mostyn family regularly received treatment for their ailments. Nevertheless, the ledgers also indicate the extent to which both Sir Thomas and Sir Roger Mostyn took responsibility for the health and wellbeing of their household servants, estate workers, tenants and poorer neighbours as part of their self-imposed duties as landlords and masters. Both Mostyn and Gloddaith halls were regularly visited by William Coyne. His treatment of household servants included the housekeeper, cook, footmen, housemaids, laundry maids, dairy maids, kitchen maids, nurse, household chaplain and estate steward. Similarly the Mostyn family paid for the medical treatment of their gamekeepers, grooms, coachmen, ploughmen, farmers, poultry maids, cowmen, carters and stable boys. The accounts provide essential information about the size of the Mostyn households – both Gloddaith and Mostyn were evidently vibrant centres of employment for the populaces of the surrounding areas. Furthermore, numerous old retainers and tenants were subject to the family’s care and attention. William Coyne was also regularly instructed to treat the livestock at the Mostyn farms – he was evidently a very versatile practitioner.

The image is a watercolour by the artist Moses Griffith (1747-1819) depicting a horse and groom with Mostyn hall shown in the background. 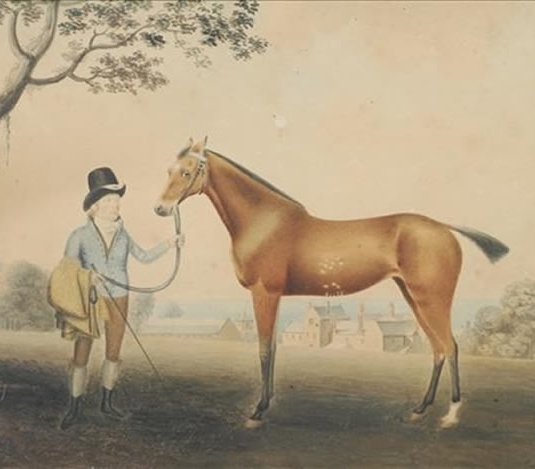